A fine-grained adventurer, breathing in all that world he encounters can teach him.

Welcome to my blog!

email address
Use the form on About page

I grew up travelling with my parents. Either it was summer or winter. Summer vacations on the beach in Croatia. Winter spending at mountains skiing and building or destroying snowmans. I always enjoyed visiting new places or returning to favourite special locations.

Even living in hotel was an experience for me. I had to explore everything. On a secret mission, I was standing in the lift. If I was tall enough I had to press all the buttons and visit every floor in the hotel. Sometimes I got lost other times I discovered something interesting. Both ways it was lot of fun. Probably not for my parents but definitely for me.

As I grew up (if at all?) I continued to travel. On my own or through other opportunities like youth exchanges or student mobilities. With camera almost every time around my neck. Questioning how things work or how people live. I kept this passion and I ask question why probably too much. I am still curious about the world. Curious to go one step further or around the corner. I can confirm that many interesting photos are created just there. Both literally and metaphorically speaking.

On this blog I would like share my travel memories, photos, stories and maybe few ideas I learnt along the way. 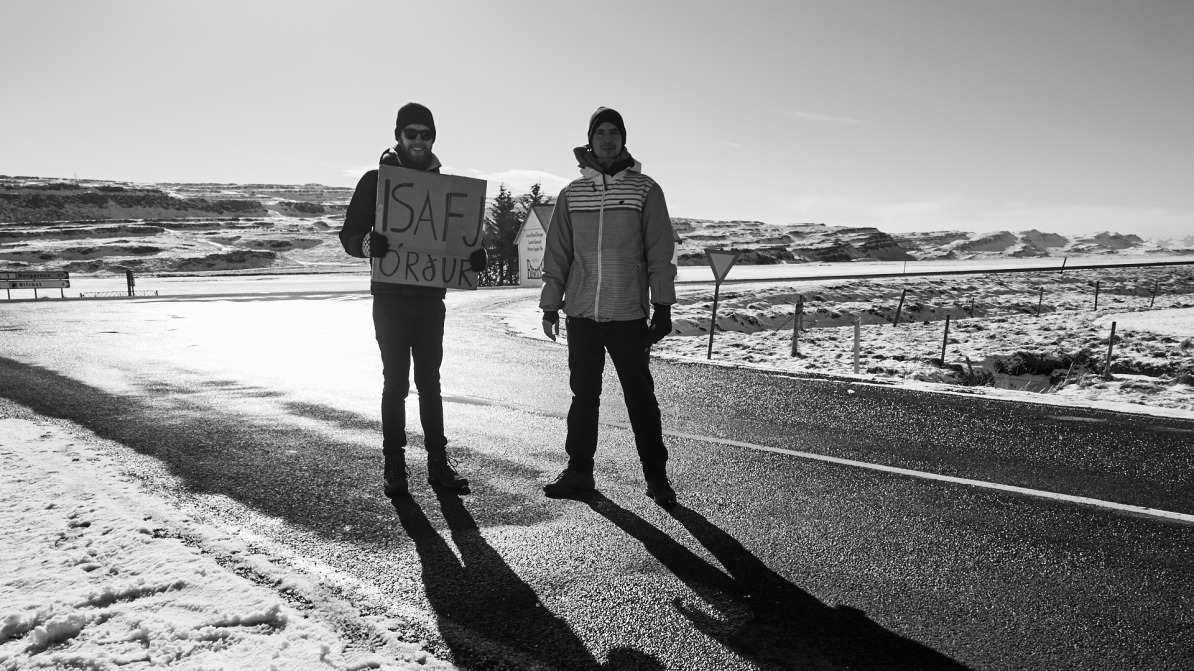 Elf church, fjord in shape of boot, abandoned farm, all possible types of weather in one afternoon

Westfjords, most remote part of Iceland. Many times missing in travel itinerary when driving around the country on ring road.

We skipped the Sonar music festival in Reykjavik due to high entrance and decided to focus on Aldrei in Westfjords instead. Aldrei fór ég suður in translation “I never went south”. A local music festival happening every Easter since 2004. Nowadays running for a two days. Curious about event and also Westfjords it was a great occasion to spend last March weekend away from Bifröst campus.

Just Janis and me. Short trip on budget. Packing lightweight. Method of transport hitch-hiking. Planned departure 11am. Real departure 12 o’clock. Hitch-hiking spot with crossroad to Westfjords was 5km away. With a sign 5km and smiley face we got a ride almost instantly. Now waiting for a main 400km ride! 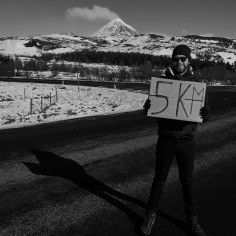 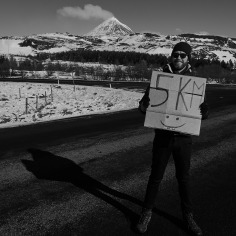 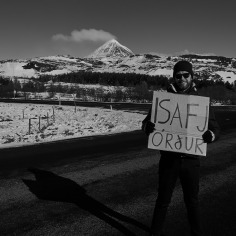 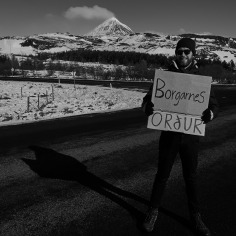 We have been waiting at the crossroad for 45 minutes. Is it too long? Well, not really. Put into consideration that it was lunch time. Also there haven’t been many cars either. One or two minutes passed and no cars on the road. We were glad if we saw a cars coming from far away!

Now it was just a question: Are they actually turning from road one to our direction, direction Westfjords? There were probably fifteen cars like that. But more important question was: Are they stopping? No. Many cars were already full, others didn’t stop. We were excited about Aldrei festival and Westfjords so we kept our optimism high.

To our surprise small silver car stopped! Already three guys inside. It was even challenge to fit in. Trunk was full so I sat down with a bag on my lap. Soon we found out that car has problem with engine cooling. We had to stop quite often to refill the water. Anyway we have been driving with average speed 110 km/h, passing by many cars. Even with stopping we always came ahead. We invented a name for our ride: An Ísafjörður-express. Noticing and passing by same cars the result was that we remembered all the cars along the way, sometimes even the driver.

Big white SUV family Mercedes, VW Golf with a guy wearing raper hat or the Korean guy in gold car driving too fast for a tourist.

Crew of IsaÍsafjörður-express consisted of Slava the driver, Gunnar in front as navigator, John in the back who woke up just five seconds ago. Everyone was coming to help with organization of festival. It was our pleasure to know the two bouncers beforehand. 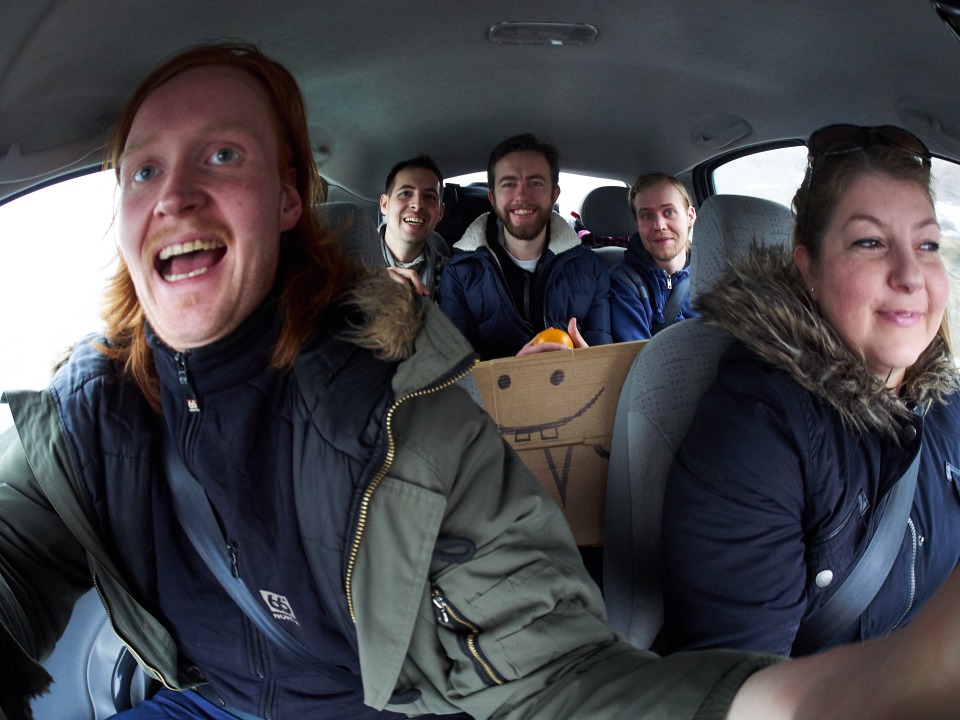 Along the long way we listened to many interesting stories about surroundings, country and life in Iceland.

Lets start with elf church. In Sælingsdalur valley is mysterious hill called Tungustapi. Place where a strange elf church in cliff is located. It is not wise to enter this place! One second in our world equals 500 years in elf church. No wonder that many people have disappeared. Folk tale is from Eyrbyggja Saga.

Elves or hidden people are generally good creatures but its recommended to not disturb them too much. It is very sensitive topic. In Iceland many roads are built around the rocks. Roads are not straight like German highways. Rocks serve as a homes for elves.

Even on the new road to Westfjords there was an incident. In the process of building the road many machines broken. Workers had suspiciously many accidents and injuries over the shift. The psychic was invited to talk to the rocks. Psychic made and a polite agreement with elves. Afterwards the road construction went smoothly.

Even nowadays it is a big issue and “considerations” for elves is important in Iceland. It was a case with construction of one road nearby Reykjavik. Environmental and elves initiatives stepped in. Stepped in to protect the elf rocks. Outcome was that important stone was moved to a new location so the building of a new road could continue. 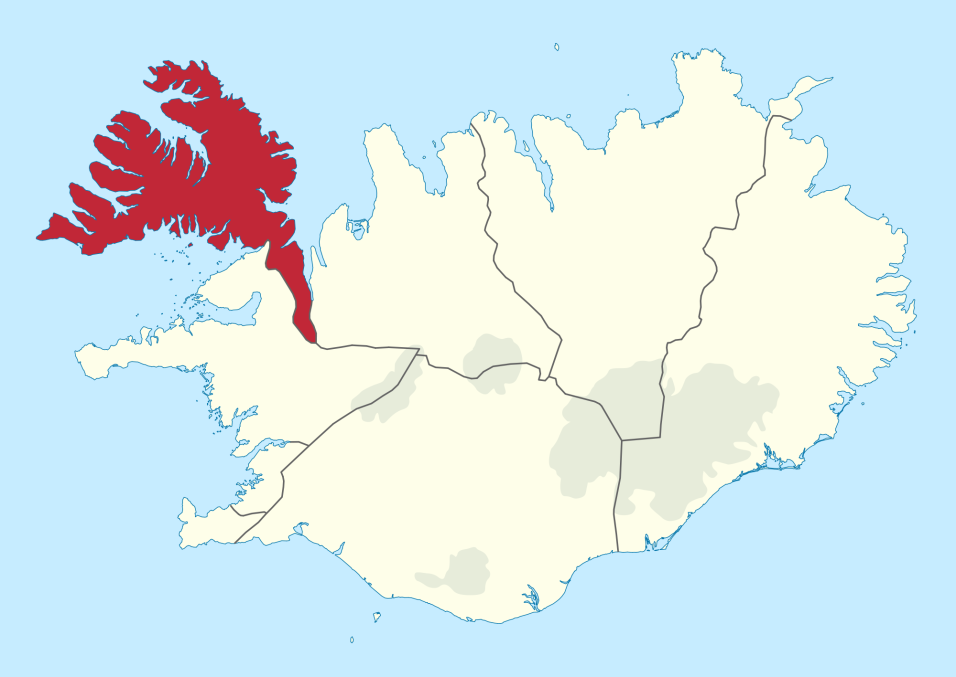 While admiring a landscape we learnt about fjord in shape of high leather boot. We have been passing by the toes before entering the Westfjords.  Can you spot the boot on the map?

John told us about his grandfather who cut two of his middle fingers. When he waved on someone, it looked like on a rock concert. 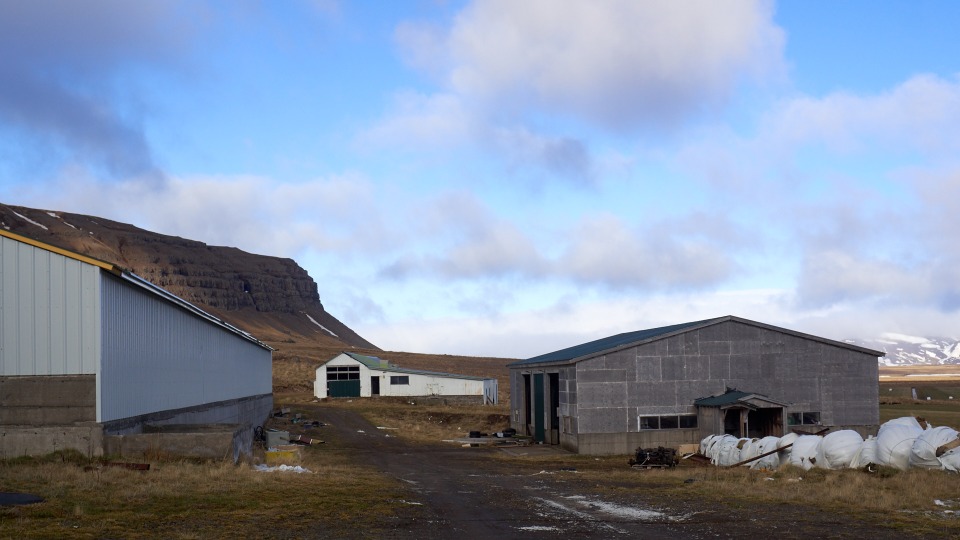 On the way we stopped at the abandoned farm were John use to live with his family before financial crisis. They invested and built this huge farm on their own. You can see that inside one of the buildings they just started to paint the walls. And suddenly they had to leave. Find new home, find new job, start from zero. They left to Reykjavik. John’s father works now as a carpenter. 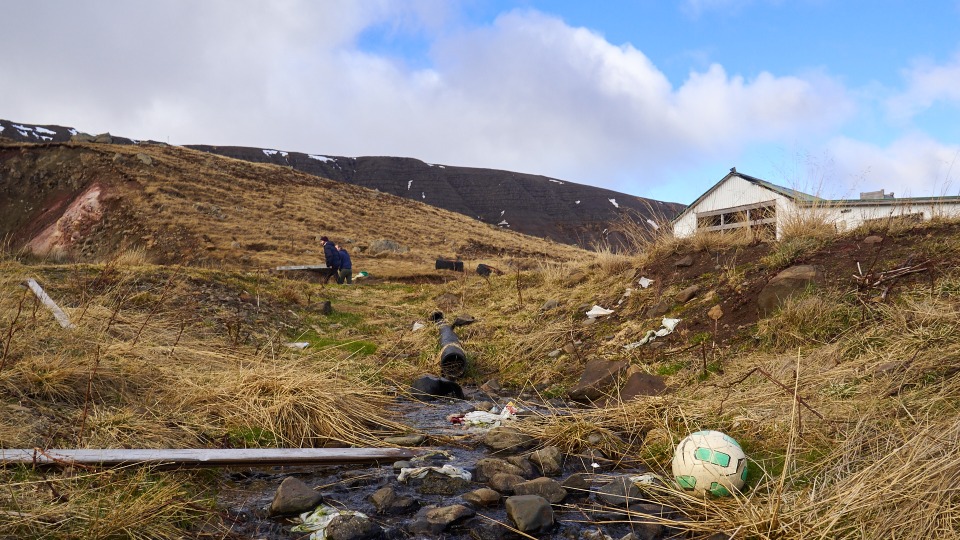 John: Everything was the same as when we left, even my football I used to play with 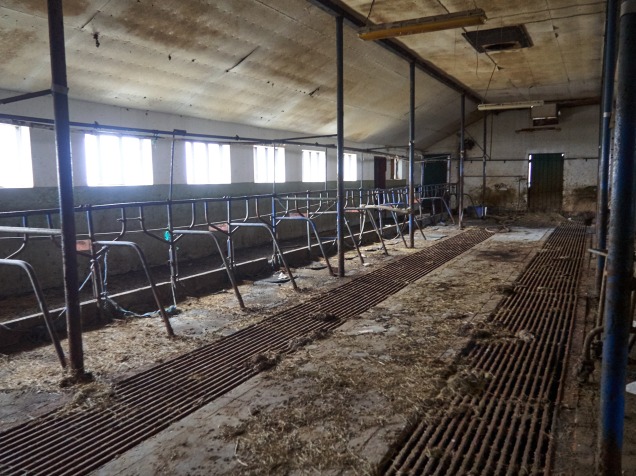 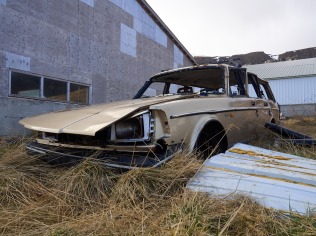 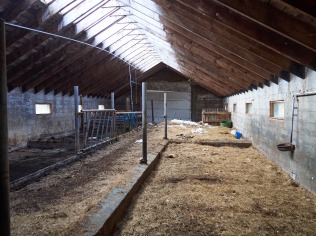 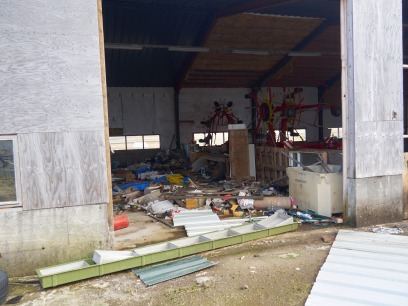 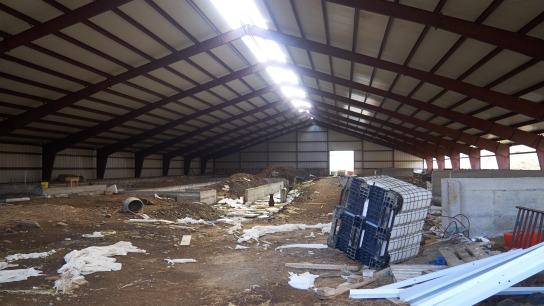 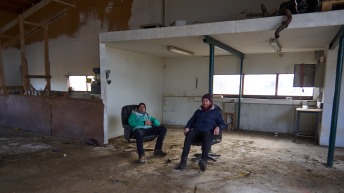 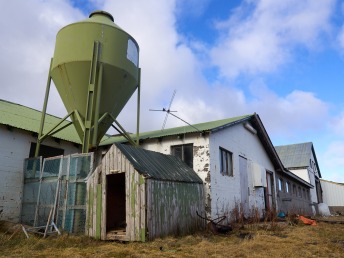 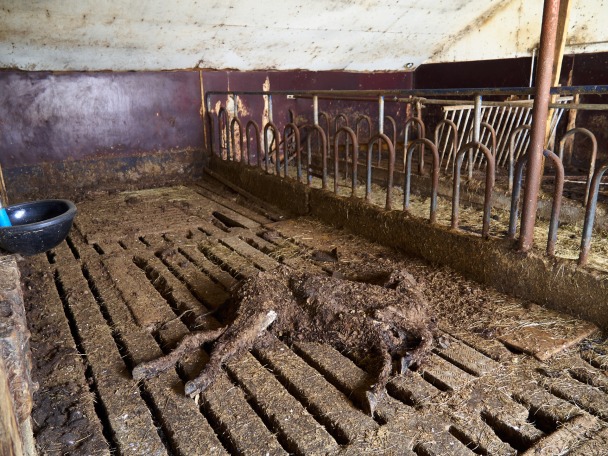 The visit of the farm was very emotional. Seeing this abandoned farm and knowing that it use to belong to John and his family. After one more water refill for engine we continued direction Ísafjörður. Sun was gone, more and more clouds covering the sky.

Typical Icelandic ever-changing weather showed-off in full elegance. Anything you wish! Blue sky and sun shining in Bifröst, snowstorm and snow drifts later. Strong wind and raining  or a rainbow? All available in the menu. 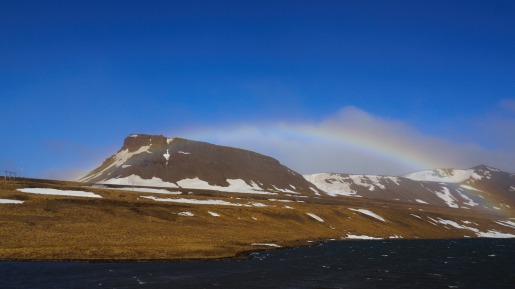 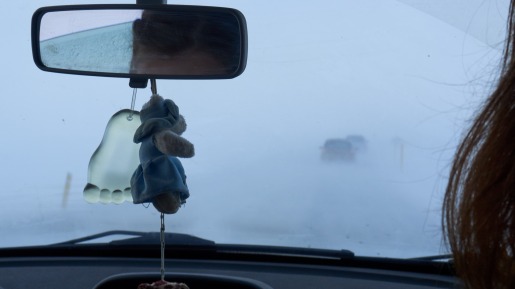 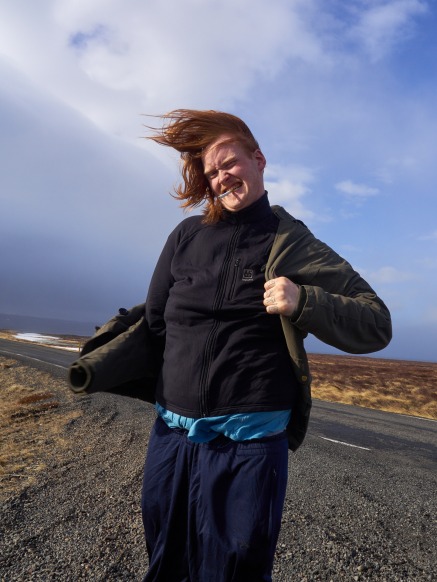 When we passed the road over mountain with snowstorm to Holmavik we appeared in area with many fjords. They were majestic, wild and raw. Road was built around the coast and many fjords were so deep and road long! In few moments the opposite fjord was so close. I wish our car could jump over ocean and get on the other side. No. We had to drive around.

In the past there used to be a ferry to overcome the fjord. It was also time where there was no paved road just slow, one way gravel road. In past it took around 12 hours to get to Ísafjörður from Reykjavik. Now it is around 6 hours on the paved road. Ferry stopped to be effective anymore and everybody drives now around. 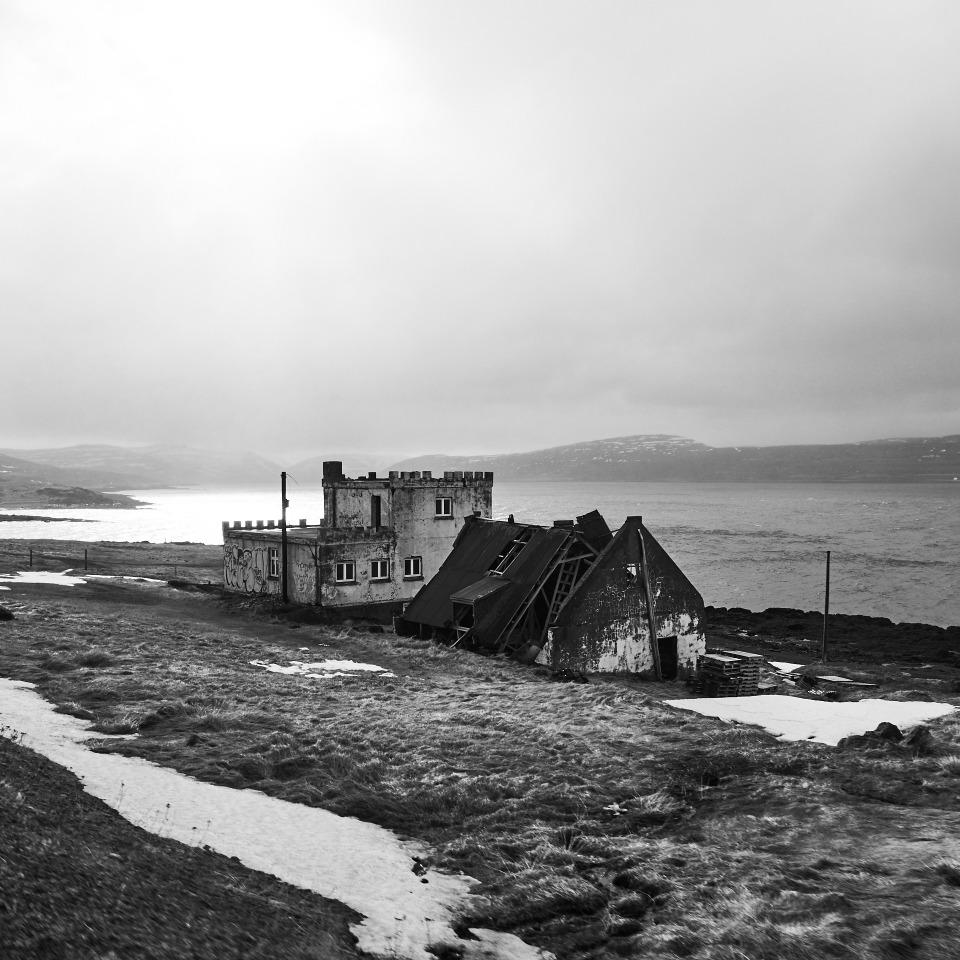 Ferry used to operate in this location

We arrived to our destination around 18h. It was quite a long way. Aldrei festival should welcome Easter and spring but weather in Ísafjörður didn’t have any elements of spring. Almost pure winter. Temperature below zero, snowing. Fjords covered in the snow, streets of the town also. We heard that two days ago it was already warm and snow melting also in Ísafjörður. We have been (un)lucky to experience never ending winter in Iceland again.

Time for a dinner, short rest in the guesthouse and get ready for Aldrei festival! 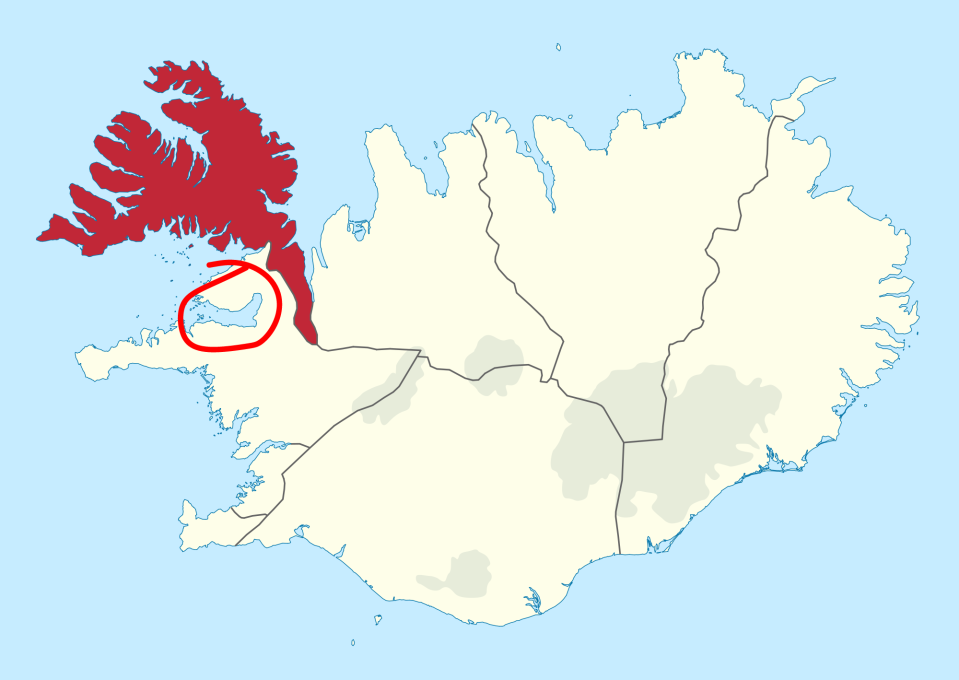 Have you found it?

Travelling is like reading a book. Those who don't travel read just one page!